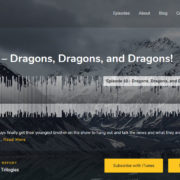 The creators of the Top Five Report enjoyed spending their time creating and discussing their top five anything’s that related to geek culture (they use the work “nerd” lovingly as we consider ourselves geeks). The idea came one day to create a podcast that followed a similar theme. They decided to host a weekly show where they would talk about recent happenings including movies, video games, books, etc. which would end with their top five selection following a specific theme. One week it could be horror movies, the next comic book movies.

The hosts, Drew and Pete, knew everything they wanted to talk about and knew the basics of recording podcasts. What they did not know was how to build a website or host the podcasts for streaming services such as iTunes and Google Play, and Spotify. That is where Nine18Design came along.

Drawing from our years of expertise, listeners can now stream any episode of the Top Five Report directly from the website we developed for them. You can also find the podcast syndicated on iTunes, the Google Play store, Spotify, and a few others. This was a fun project for the team as it was something we don’t see too often. We combined the use of a custom-made WordPress theme and media player plugin.

At the time of writing, the Top Five Report has 42 episodes in the bag and seeing the list of future episodes, we believe they will be going for a long time.